All about the golden (or Syrian) hamster

Home " Hamster info " All about the golden (or Syrian) hamster 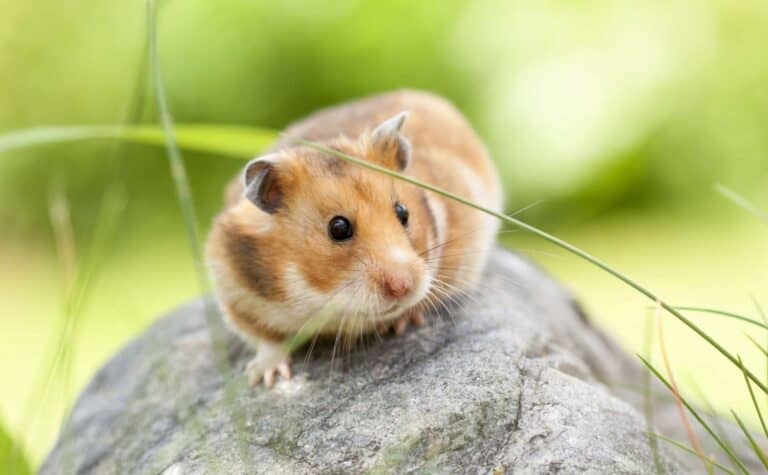 The golden hamster is a small mammal of the hamster family. It is native to Central Asia and is very popular as a pet. Golden hamsters are generally very affectionate and get along well with children. They love to play and are very curious.

Description of the golden hamster

Golden hamsters have a period of 16 to 18 days gestation and may have up to 12 children. They are usually very affectionate with their owners and are one of the most popular pets.

The origin of the golden hamster

The golden hamster is a small species of hamster from Syria. It was introduced to Europe in the 1930s and has become one of the most popular hamsters as a pet.

Behavior and character of the golden hamster

Golden hamsters are nocturnal animals and are very active at night. They need a safe and comfortable place to sleep during the day, like a cage with a layer of sawdust or straw.

Golden hamsters are solitary animals and do not tolerate the presence of other hamsters around them. However, they get used to humans and can be tamed. They are curious and like to explore their environment.

They are rather wary and may bite if they feel threatened. However, if they are well socialized from a young age, they become very docile and tolerate human interaction without any problem.

Life span of a golden hamster

Feeding a golden (or Syrian) hamster

The feeding of the golden (or Syrian) hamster is very important for his well-being and its health. It is advisable to provide him with a balanced and quality diet so that he can live a long and healthy life. good health.

His food must be balanced, of good quality, and rich in nutrients because it is very sensitive to nutritional deficiencies.

The golden hamster is an omnivorous animal. It feeds on cof cereals, fruits, vegetables, insects and small mammals. They can also store food in their cheeks.

The recommended foods for the golden hamster are pellets for rodents, seeds, vegetables and fruits. Rodent pellets are a good source of nutrients for the golden hamster and should be provided ad libitum. Lseeds should be given in small quantitiesThey can cause digestive problems. Vegetables and fruits should be given in small quantities as well, as they can be rich in sugar.

Is the golden hamster recommended with children?

Yes, your children will love it, that's for sure. You will have to teach your children how to handle it gently and how to tame it without scaring it. However, it is the breed of hamster the easiest to adopt because less wild than the Russian hamster or Chinese for example.

The needs of the golden (or Syrian) hamster

The golden hamster is a very popular little pet, especially with children. This small rodent is very affectionate and easy to handle, which makes it an excellent pet for families with children. However, before adopting a golden hamster, it is important to know the needs of this animal in order to offer it the best possible living conditions.

As previously mentioned, the Syrian hamster is a nocturnal animal, which means that it is more active at night than during the day. This means that you probably won't see it much during the day, and that's perfectly normal. It is important to not to disturb him when he sleeps and not to take him out of his cage during the day, as this can stress him and prevent him from resting properly.

The bars of the cage should be spaced far enough apart so that the hamster cannot squeeze through the bars and escape. The cage must also be equipped with a secure locking system so that the animal cannot escape.

Golden hamsters are very curious animals They like to play, so it is important to provide them with plenty of toys in their cage to play with!

Care of the golden (or Syrian) hamster

Golden hamsters are very clean animals and can be taught to use a litter box. Litter must be changed regularly to avoid unpleasant odors.

They are usually very clean and do not require much grooming.

Where to buy a Syrian hamster?

The best place to buy a hamster Syrian is a breeder or a pet shop of good reputation. This will ensure that your hamster is healthy and has been raised in a clean and safe environment. Once you have found a good source of Syrian hamsters, you can choose from a wide variety of colors and coat patterns. With so many options available, it's easy to find the perfect hamster for your home.

Can I give bread to my hamster?

All about the Russian hamster