Home " Hamster info " How many babies do hamsters make? 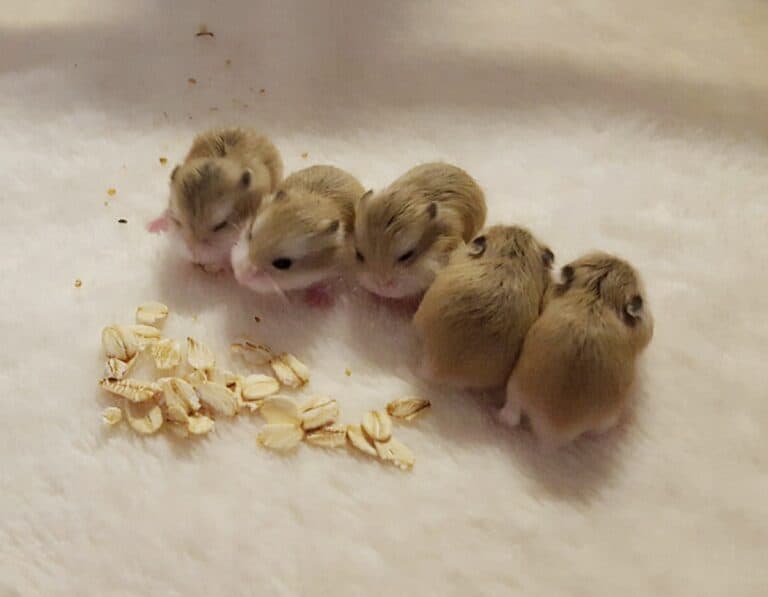 Hamsters have a short life cycle, generally living between 1 and 3 years, and can have on average up to 12 babies at a time. The number of babies in a litter depends on several criteria: age of parentsthe breeding period and especially the hamster?s hope

In this issue View
1 How many babies do hamsters make?
2 When to separate baby hamsters from their mother?
3 How to take care of baby hamsters?

Depending on the breed of your hamster, if your female hamster is pregnant, she will give birth to a litter of pups as shown in this table:

When to separate baby hamsters from their mother?

The separation between the baby hamsters and their mother is important. If you don't separate them at the right time, the mother can become increasingly aggressive towards them.

Don't think of this as malice on the part of the female, it's a natural behavior that can be explained very well. In the wild, once the weaning is over, the wild female hamsters leave their nest to find another one and leave their young able to fend for themselves.

Thus, when they are in captivity, hamsters will try to reproduce exactly the same behavior: the mother will try to get away from her young after the weaning period. If you leave them in one cage, they will fight until some of them die.

You will have understood that at the end of a period (called weaning), you will have to separate the little hamsters from their mother. What is this period? Here it is, it depends on the breed:

Having baby hamsters is a responsibility, including separating the young from the female and buying a second or third cage for your hamsters.

When you separate them, you will need to know what is the sex of the hamstersIf you don't, you will quickly find yourself with a new litter of babies!

How to take care of baby hamsters?

What should be done after the birth of a baby hamster? The answer is simple: nothing! Their mother takes care of everything. Many first time hamster owners wonder how to take care of their babies, what to do with them when they are so tender and helpless: let Mother Nature do it, their mother vs. providing for all their needs during the first month.

During the first 15 days: do not touch the babies, let the mother take care of them. If you touch them in the first hours, the mother could smell a foreign smell on the skin of her babies and kill them. Again, don't think of this as cruelty, just avoid human intervention in a process that should not be involved. Just watch for 15 days, except for adding water and food. food !

Some baby hamsters, the weakest or smallest ones, may die, this is a natural process that you should not interfere with.

Where to buy a hamster?