All about the Roborovski hamster

Home " Hamster info " All about the Roborovski hamster 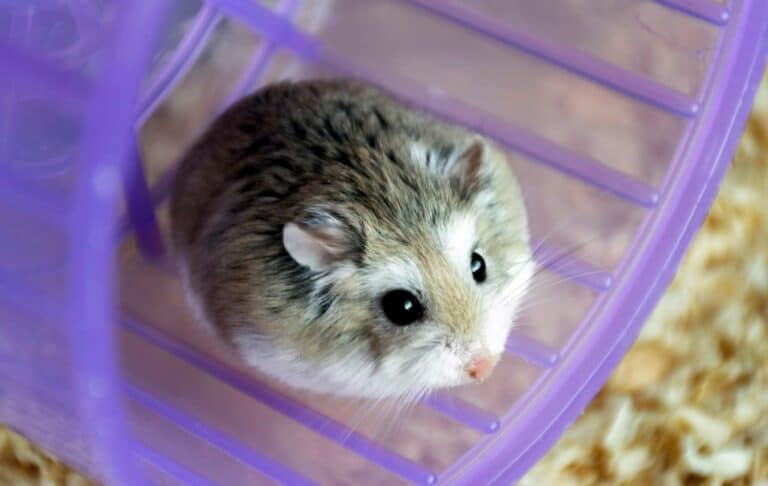 The Roborovski hamster is a small mammal of the dwarf hamster family. It is native to Mongolia and China. Very popular as a pet because of its small size and gentle character, it is also very agile and not always easy to catch!

Description of the Roborovski hamster

Very active and curious by nature, it is a very popular hamster appreciated for its small size, its keen intelligence and its totally harmless character. It is also known as the "dwarf hamster" or "pygmy hamster" since it is the smallest of the hamsters.

Origins of the Roborovski hamster

The Roborovski hamster was discovered in 1894 in Mongolia, where it originates from, by the Russian zoologist Vsevolod Roborovski who gave it its name.

Its domestication and captivity as a pet began only in the 1970s. Since then, it has spread widely and is very common among hamster owners.

Behavior and character of the Roborovski hamster

The first words that come to mind when we talk about it are : fearfulThey are lively, solitary and cute. Where other hamsters would bite to defend themselves or in the face of fearthe roborovki hamster will prefer to flee. It is therefore extremely rare that it biteswhich makes this hamster an excellent choice for give to a child.

The roborovski hamsters are one of the most popular species, partly because of their uniqueness: they are known to be particularly assetseven for hamsters, and they love to play as much as to dig. Therefore, they need a spacious, well-equipped cage with a wheel, tunnels and toys in sufficient quantity.

This overflowing activity is usually expressed at night, as it is a nocturnal animal and therefore very active during the late hours.

In captivity, it is important to provide a stimulating environment to express their active nature. They are also known to be very social rodents with humans, which they are not necessarily with other hamsters. For this reason, we advise you not to create a cohabitation with its companions if possible, and to do not introduce a second hamster otherwise one of them would end up very badly!

Finally, their very small size necessarily invites to a handling with as much softness as their coat is! This small size also allows him to escape easily from his cage if it is not adapted, or even from the hands of a person if this one does not hold him correctly. And good luck to catch him, it will be mission impossible!

Life span of a Roborovski hamster

In captivity, they can live up to 3 yearsBut on average, they live only 18 to 24 months. I had however a hamster of Roborovki which lived almost 4 years, which in the end leaves a rather broad range!

If you are considering adopting a Roborovski hamster, here is everything you need to know about their diet.

Roborovski hamsters are herbivores. This means that their diet consists mainly of plants. They like to eat seeds, herbs, fruits and vegetables.

Roborovski hamsters need a balanced and nutritious diet to stay healthy. Fortunately, there are many many food specially formulated to meet the nutritional needs of these small animals that you can find in pet shops or on the internet. Roborovski hamster food contains oat bran, rice bran, wheat bran, corn flour and soy flour. They should also contain a certain amount of essential vitamins and minerals.

Roborovski hamsters like to eat sunflower seeds, sesame seeds, pumpkin seeds and sunflower seeds. You can feed them mixed seeds or let them choose their own.

Fruits and vegetables can be given too, but in limited quantities, otherwise your hamster will have diarrhea. You can give them :

Roborovski hamster food should be rich in fiber. High-fiber foods you can feed them include:

Is the Roborovski hamster recommended for children?

YesIt is one of the most popular species with children, because they are so small and cute! No risk of bitingThe only real risk with these little balls of hair is that they manage to escape from their cages or from the hands that hold them, thus generating a potential big crying fit from its or its young owners!

The roborovski hamster needs a spacious and well-ventilated habitat. It is important to provide enough space for the animal to run and explore, so that it can travel several miles each night.

The most common diseases in the roborovski hamster are the following:

To prevent diseases in roborovski hamsters, it is important to maintain a high level of hygiene in its enclosure. Rottorovskis are also very sensitive to temperature changes, so it is important to keep them warm and protected from the wind. In any case, in case of illness do not hesitate to consult a veterinarian.

Where to buy Roborovski hamster?

Opinions are still divided on this subject! These hamsters can be purchased at breeders, shelters or pet shops. Each option has its own advantages and disadvantages:

All about the Russian hamster

All about the Chinese hamster