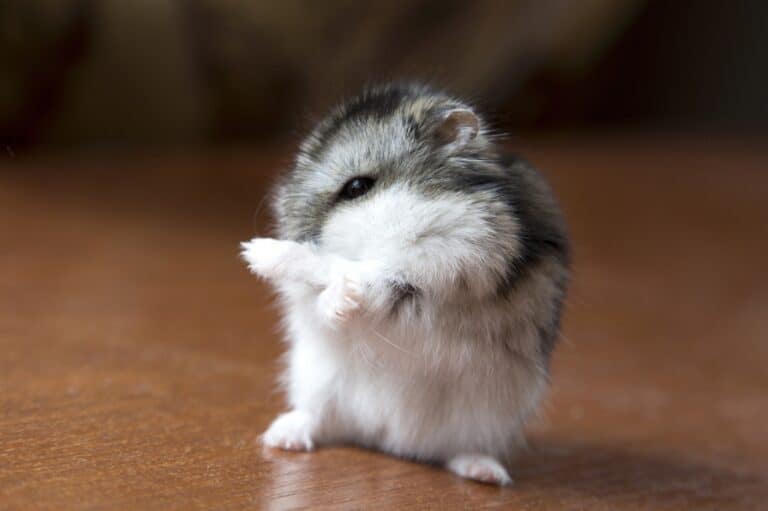 A female can be fertile every 4 days, so if you have put a female in heat and a male in the same cage, you probably want to know how much time you have left before the arrival of the young, also called gestation period. But how does reproduction work in hamsters?

First of all, you should know that breeding hamsters is simple and fast. But keep in mind the other side of the coin: you will have to be able to support the numerous young to be born. In addition, to have viable and healthy young, it will be advisable to avoid certain types of mixing between populations.

How long does a female hamster stay pregnant?

Depending on the species of your little friend, refer to the table below. This is the gestation time, which is the time between the mating of your hamsters and the birth of the babies.

During this period of gestation, you can give your female a protein supplement if you wish. It is not an obligation. It is also at this time that the female will prepare her nest to welcome her future babies: give her some cotton balls that she will arrange as she likes by pushing them into a corner out of sight most of the time, to isolate herself.
On the physical side, the female will of course get bigger and you may see her nipples filled with milk in preparation for the nursing phase.

How long is the female hamster in heat?

During the breeding periods (see below), a female hamster is in heat every 4 dayss. During this period, the female is in ovulation period, that is to say she is not fertile only a few hours only.

The breeding period of hamsters

In the wild, each species of hamster has its own cycle and its own period of reproduction. In other words, there are specific times during the year when females are fertile.

The above periods are the observation of what happens in nature: we see that in the winter period, hamsters do not reproduce. In captivity or in breeding conditions, this cycle is not necessarily respected.

Now, ideally and in order to follow the natural rhythm, except to be breeder If you are a professional hamster breeder, you should respect this cycle and these reproduction periods, for the good health of your hamsters, especially the females. If they have too many babies, too often outside of these periods, they will become exhausted and will die more quickly. Unless you are a hamster lover, we advise you to avoid breeding hamsters as much as possible.

How do I know if my hamster is pregnant?

Read this article to help you to know if your hamster is pregnant. To sum it up, you should know that in the first days, unless you have seen the act of mating, you will not necessarily be able to suspect it. Later on, the female's belly will start to grow and become rounder and you will see the appearance of udders.

My hamster is giving birth : what to do ?

Nothing! Let nature take its course, do not touch the young or the mother. Put the male in another cage if it is not already done. The female will give birth of several baby hamsters that you should not touch during the first 15 days of their life, otherwise the mother could kill them and eat them if she feels your human smell on their skin. So make yourself as discreet as possible.

At birth, the mother hamster will cut herself the umbilical cord of her babies: generally, if they are viable, give a little cry, are in good health she will let them live. On the other hand, if the female detects a problem on a newborn, she will also eat it.

The only thing you can do to help your hamster is to leave it alone, in a room without too much noise, and without sticking to the cage (even if it is exciting!), and feed it accordingly.

After giving birth, your female hamster will protect her babies during their first few days and feed them by nursing them. Do not try to feed the little hamsters!

When they become "big", that is to say able to take care of themselves, the female hamster stops feeding her young, who are now able to eat by themselves. In the wild, she will tend to move away from her young to find another place. In captivity, it is up to you to separate the mother from her young to prevent them from fighting and attacking her.
This period of separation between mother and baby is called weaning. It depends on the species of your hamster:

At the end of this period, you must put the mother and her babies in different cages.

At what age can a hamster have babies?

We speak about sexual maturity, that is to say the time during which the males and the females are in age to reproduce. Two main criteria: the age of the hamster and its species.

Even though this is theoretically possible (and will happen if you keep male/female hamsters in the same cage), do not breed your female hamster more than once a year, in order to keep her healthy. Breeding too often will exhaust her and shorten her life. life span.

We advise you not to start breeding hamsters, do not try to make them have babies because the rules are quite restrictive and it is better to leave this activity to professionals.
However, if you want to start this activity, here are some rules that must be followed: